The earth has a number of resources for a greenhouse gas free environment. Fossil fuel got its initial hype due to its easy availability. But with time human have realized the setbacks of this energy source and is now trying to move towards renewable energies. Geothermal power is, one of the least known among the list of renewable energies, but one can get startled after knowing about its immense possibilities.

According to a survey by Zion Market Research, the geothermal energy market is expected to reach $9 billion by 2025. Geothermal energy production is a natural and renewable process. The geothermal resources are unlimited, and the only challenge is to use it under practical economic situations and conducting discussions related to the environment and society.

Geothermal Energy: What one Needs to Know!

Geothermal Energy is produced by the radioactive decomposition of substances on the earth’s surface. Studies have been conducted to evaluate and explore the geothermal power generation in the form of hot springs and volcanoes. The thermal energy of the earth is boundless, but only a small amount of this energy can be utilized due to the constraint of geological conditions. Presently, it is one of the most useful sources of energy.

Though, there are specific challenges such as limited geographical areas, limited resources, and transmission losses that are coupled with the generation of geothermal energy. 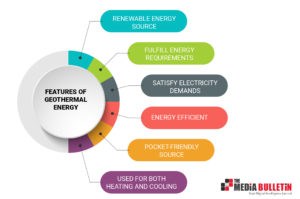 Geothermal is a sustainable power source. It is renewable as the earth has preserved a large amount of heat energy during the evolution of the planet. Heat is generated by decomposition of the radioactive matter. Geothermal Energy is an inexhaustible resource since it originated from the inner temperature of the earth, and the water is continuously at the boiling point. The durable power source can renew itself and will run until the end of time.

Energy security and stability for the present and future generations cannot be compromised. Geothermal Energy is clean and inexhaustible. It is potential to generate electricity for industrial and commercial supply. Experts say that geothermal heat is currently contributing around 10% of the energy requirements using the latest technologies. As we move into a new millennium, geothermal resources seems to play a prominent role in satisfying the energy demands for a large scale industrial use without creating any greenhouse gas.

Another incredible advantage of using geothermal energy is the capability of giving geothermal power to your home. Geothermal power plants are being manufactured all over the world. These plants use steam for electricity production. The steam emerges from hot water reservoirs, which are found beneath the earth’s surface. The types of power plants for electricity generation are Binary cycle, dry steam, and flash steam.

Geothermal heat systems consume less electricity than conventional methods. Their efficiency is rated according to the coefficient of their energy production. The geothermal heat pump constructors use computers to regulate the ability of the heat pump. To obtain the optimal efficiency out of the geothermal heat pump, one can use Energy Star Labels or Energy Efficiency Ratio.These labels are designed to check energy efficiency and helping us to protect the habitat through energy-efficient practices.

The report suggests that Geothermal Energy is emerging as the cheapest energy source and can give fierce competition to gas-fired power and coal. The government is putting more funds into geothermal power research to produce rapid and dramatic enhancements.

5. Used for both Heating and Cooling

Geothermal heating and cooling method are used to harness the geothermal energy. The energy transfer occurs between the building and the ground. When heating is required, the ground source heat pump which separates thermal energy from the heat source. In the geothermal heating process, when the building is getting cooled, the ground surface is getting heated. This process occurs due to a difference in temperature. It is a environment friendly process which needs a little electricity support to run the fans. Interestingly, it does not leave any carbon footprints.

The approximate worldwide energy consumption is about 15 terawatts (TW), and it is not anywhere nearer to the amount of energy that is stored underneath the earth. Though most geothermal reservoirs are not profitable, enough and humans can mostly utilize a small portion of the total potential of this energy. The realistic estimates for the possibility of geothermal power plants vary between 0.035 to 2 TW.

During electricity production, geothermal power plants do not burn any combustible substances. So, they produce fewer air pollutants in the process of electricity generation. The power plants eliminate the hydrogen sulfide from geothermal reservoirs, which prevents the occurrence of industrial pollution. The Geothermal Energy Market is expected to grow significantly. The most crucial advantage of this energy is its constant availability. The government rules and regulations regarding eco-friendliness and sustainability will stimulate its market growth in the coming years. Due to the high demand for rapid industrialization, the geothermal energy is soon going to dominate the market.

While harnessing the geothermal energy, water quality standards are maintained. Heating and cooling systems ensure that little amount of water is discharged into rivers and lakes. This process also reduces the impacts on water species such as fish and algae. According to the U.S. survey, there is no case reported about water contamination from geothermal power plants.

The measure of land required by a geothermal plant depends on power capacity, cooling system, wells, piping arrangement, and energy conversion system. Land subsidence is an event where the land surface drop due to the extraction of water from geothermal reservoirs. The land hazards can be minimized by positioning the geothermal plants at a considerable distance from fault lines. When these plants are placed in densely populated areas, communication, and regular monitoring with local authorities are necessary.

Geothermal plants are of two types, closed-loop, and open-loop. In closed power systems, the inner gases are not allowed to divulge in the atmosphere. In the open-loop system, gases and steam are exposed to the atmosphere. Air emission from these plants is considerably less than the plants using traditional fuel sources. The air waste mainly generated depending on the type of conversion system and the physical characteristics of the plant.

A geothermal energy power plant is a thousand times larger than other sources. The advanced technology has made it the most reliable energy source, as the extraction cost for this has decreased significantly over the years. The ground heat pumps are utilized in densely populated urban areas. As it is weather independent, it generates energy 24/7, which makes it the most reliable energy source. It has an annual growth rate of 6 percent, and the installed capacity for thermal energy would be 40 gigawatts in 2020.